Old school chum, Mark Hodgkin, has written that his grandfather, Captain R.N. Kelsey was with the group that attemped the first Cape-Cairo expedition by car, in 1913-14.  He gave permission to post his email comment, herewith:


I was interested in the Cape to Cairo plans. My grandfather was the 1st guy to try this drive (according to Wikipedia) in 1913-14 - Captain R N Kelsey. It was an ill planned trip which ended which his dying of gangrene after being attacked by a leopard after (the idiot) took a shot at it in long grass with a single loading gun. Net result was I never met him (nor did my mother know him). I have vague plans with my brother to go and follow his route and see if we can find his grave.

I also found a couple of other fascinating news items from that time, the early part of the last century:
In the New Zealand, Atautau Standard, a story entitled "A Daring Adventure" of 1911.

We learn that Captain Kelsey had served in the South African War and would "doubtless be visiting scenes which should be familiar...".

"It is proposed to establish over 100 depots at suitable distances along the route...".

"It is expected that the journey will be completed in... four months".

"During this journey, twenty rivers and four lakes will have to be crossed, and at such places it is proposed to construct a raft of whatever timber can be found on the spot on which to place the motor car".

Click on the image above-left for the facsimile of the news article. 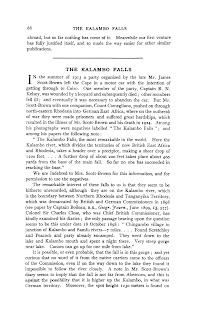 The trip itself was, unsurprisingly, rather tougher than anticipated in that article.  See the Geographical Journal of 1926 "The Kalambo Falls".  Copied at right; click for large view. (Wikipedia on the falls)

The party were credited by the Journal as having been the first [Europeans] to record in writing the Kalambo falls which "seem to be hitherto unrecorded".

On the downside, Mark's grandfather "Captain R.N. Kelsey was wounded by a leopard and subsequently died; other members fell ill; and eventually it was necessary to abandon the car".

And two that made it, including one Count Comegliano, got caught up in the First World War, captured by German troops in German East Africa and "suffered great hardships". One can imagine....