This weekend we go down to Koh Samui in Thailand for the Regatta there.  Gordon will be on our arch-rival, Baby Tonga.
See the boat blog, here.
Update, 12 June: unfortunately Gordon was unable to make it, doctor's orders post-op, told to rest.  We had close tussle with Tonga, the result at the end being -- once again, like at King's Cup last December -- that we were equal on points after 10 races, and this time we pipped Tonga on countback, as they did to us last time.  Pete Sorenson ("Soro") presented us with the "TongZena Cup" at the Prizegiving, to be fought over each time we meet each other, next time most likely at this year's King's Cup.  Overall, we were both mid-field-ish: we were forced to race in IRC 1 Division, which doesn't suit either of our boats, which are normally in a Premier IRC division for our sort of boats, but there weren't enough of us this year to form that division.
For more and photos, see the Xena blog, here.

Update (15/9/11): For those interested in cars: it's a 1968 Mustang, modified to FIA Race Rally standards, with full crash cage, racing seats and full harnesses, new 301 cu in (5 litre) engine, with 5-speed box, heavy duty radiator,  extra heavy duty suspension, raised, with crash pads underneath, and we carry spares for just about everything from wishbones, to clutch. Here in Africa, it's hugely popular. Everyone wants to buy it!

Old school chum, Mark Hodgkin, has written that his grandfather, Captain R.N. Kelsey was with the group that attemped the first Cape-Cairo expedition by car, in 1913-14.  He gave permission to post his email comment, herewith:


I was interested in the Cape to Cairo plans. My grandfather was the 1st guy to try this drive (according to Wikipedia) in 1913-14 - Captain R N Kelsey. It was an ill planned trip which ended which his dying of gangrene after being attacked by a leopard after (the idiot) took a shot at it in long grass with a single loading gun. Net result was I never met him (nor did my mother know him). I have vague plans with my brother to go and follow his route and see if we can find his grave.

I also found a couple of other fascinating news items from that time, the early part of the last century:

Photos of the entries

NOTE: the photos below are not actual pictures of the entries, but examples of the same model and year (except for the Pajero) from the internet.  I've made acknowledgment via links to the sites I got them from, for which "hat-tips" to all.  Photos below:
Read more »

These are the classics that will be taking part in The Event.
One of the 280SE Mercedes is looking for a replacement co-driver.  If you're interested, get in touch with me and I'll pass on to Roger the organiser..
The itinerary is here.

We'll be driving one like this one, a 1968 Ford Mustang, though I'm not yet sure what model.  Will post the actual one when I get a picture from Gordon, who's out of touch for the moment....
This is Gordon's mighty Mustang:

Postscript: I see David Hall is in the 2011 Rally....  Still wondering about the car.
Notes from the organiser, Roger Pearce "below the fold" (as we cool bloggers say).  ie, click on "Read More"....  I paid the entry fee today, so it's all go.  Here's the website for the event. 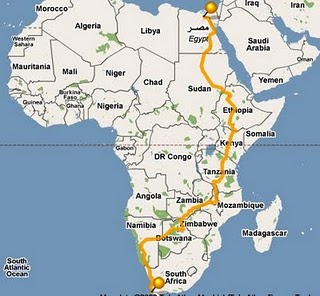 From 15 May[cross-posted from family blog]:
I just committed to accompany Gordon Ketelbey as his co-driver in a rally from Cape Town to Cairo, from 6 September to 21 October.  Not sure of details yet; Gordon will let me know when he's back in Oz.  He's sailing in some races in Europe at the moment.  We got to know Gordon at the King's Cup last year, where he was crew on Baby Tonga, one of our competitors.  We asked him to join us on Xena for the Hong Kong to San Fernando race in April and he flew up from Melbourne for that.  Gordon's about my age, retired having sold a business about the same time we sold Wall Street International, 4-5 years ago.
He loves sailing and classic cars.  Wise man....

Below jpeg of the itinerary.  If printing, best in Landscape, not portrait.

I've just created this blog, to record the preparations, thence the trip, of the 2011 Cape Town to Cairo Classic Car Rally, run by Classic Car Events, of South Africa.
This came about from sailing. I met Gordon Ketelby at the King's Cup Regatta in December 2010, where he was racing in the Beneteau 53f5 Baby Tonga and we were on our boat Xena.
Gordon'g a chap like me, sold a business and retired, hence out and about doing various things, mainly sailing and driving classic cars.  Wise fellow.
I told him about my time in Italy with our 1950 Jaguar XK120, which we used to take to events like the Coppa D'Oro delle Dolomiti and the Winter Marathon.
One thing leads to another: I get message from Gordon a week or so ago, asking if I'd like to join him for this rally, and here we are.
Contact me here with any comments or piccies, or comment direct in the comments section.
Peter F.
Update 22 May, couple of photos from 2005 Coppa d'Oro, Peter's 1950 Jaguar XK120:

This car had a brass plaque on the dash saying that it was an exact replica, built in 1950, of the 1949 XK which created a speed record in Coventry, around 129 mph, if I recall.  It was a lovely car, immaculate in condition.  I had a couple of -- reversible -- modifications made to allow for my 6'4" (192cm) frame: namely thinner seats, made of Connolly cow-hide (hand made in Milan and gorgeous), and a smaller steering wheel.  Both modifications so that I could slip in behind the wheel; with the original thicker seats and large wheel, I literally couldn't fit in.  As it was, it was much easier for me to get in with the top down, and we drove it top-down even in the Winter Marathon, which is mid-winter in Italy, up and down winding snowy mountain roads, with the temperatures down to minus 17 degrees.

Ray and I had a lot of fun in this car, but I eventually sold her after we'd done the various events around Brescia in Northern Italy a number of times and it was clear that we weren't going to get into the Mille Miglia, for which I'd originally bought her.  The MM needs something "sexier", they hinted.  We thought her pretty sexy, though, and she was much admired -- the Italians, men and women alike, do love their cars: Che Bella Macchina! they would say, as we glided past, we cool older dudes....