Unlike Marsala, which was a bit of a damp squib, Agrigento surprised delightfully on the upside.  The largest UNESCO cultural heritage site in the world, with beautifully preserved temples.
And Villa Athena is the place to stay when here.  With fabulous views over the Valley of the Temples.  Here's a description from a book "New Luxury Hotels" by Nicola Lecca, which they provide in each room of the Villa: 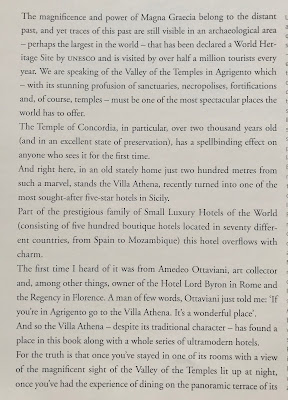 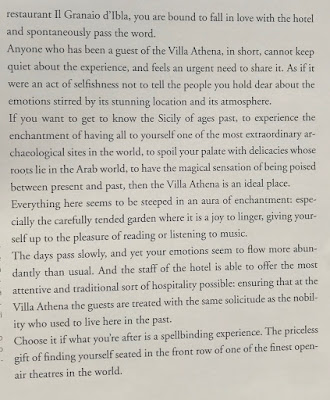 Towards the boot... Calabria and Sicily

I first went to Pompeii with sister Anne, mother and dad, must be in about 1955, shortly after they'd done the most recent excavations.  Then again, I guess sometime in the early seventies.
Now it's much bigger than I remember.  Much more excavated, and walking around is like walking around a Roman town.
We were thinking that it's so big now, they ought to take a small section of it, and rebuild it as it would have been just before the eruption. It wouldn't take much and would be fantastic.  But the Italians won't do it, I'm guessing, either because it's not allowed (likely) or because it's not la bella figura...
In any case, it's well worth a visit, a great day....
Some of Jing's photos: 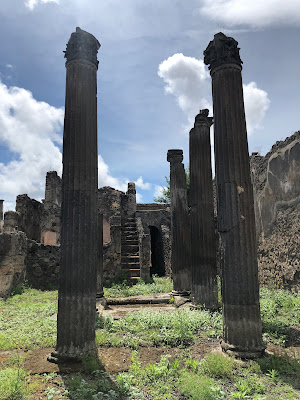 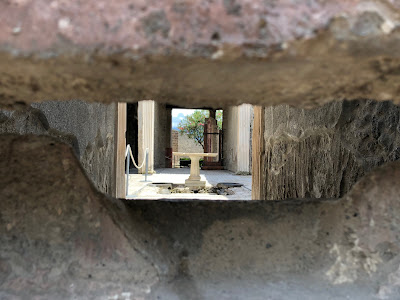 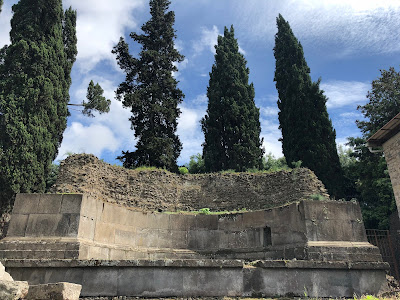 
*Why were we early in Brescia? Because of the breakdown - a pretty major breakage of a part of the differential system, which would have taken days to fix normally - we had to miss the section from Rome to Milan.  When fixed, we went straight to the Monza Racetrack - a very famous F1 racetrack - to join the other cars, which turned out to be the front runners.  We did our time trial and headed off. Result: we were early in Brescia, waiting for Jing and John to text us that they were on the finish line, then we joined the cars that were coming through.  It took about 2.5 hours for all 450+ cars to go through the starts and finishes.

Well, we finished the Mille Miglia, but not for want of our little car - a 1951 Ermini - trying by various ways to stop us...
First the breaking of suspension: solution - fixed by welding, as posted previously, but with the result that we were timed out of the start.  You're given 15 minutes leeway, and then you can't officially start.  We were at the start line 17 minutes late. So day was spent following the other cars to Rome.
Second, on the last day the car wouldn't start: solution - throttling the air filter intake on the carburetor.
Third, soon after getting started on the last day, on way to start line: the half-shaft from the differential to the right wheel snapped.  Result no gears.  Solution - car pushed over the line, to get us a start, just two minutes before cut-off time (i.e. 13 minutes late), then trucked to Milan, where a new half-shaft was found and replaced in just over an hour, so we were able to continue to the finish, officially, passing by time trials at Monza on the way.
Photos follow in later posts


So, because we had out suspension problem we weren't able to start the race today.  We had the car repaired, by the guys in the post just before this, and were off again at around 10.30, the rest of the fleet having left several hour earlier.  We decided to go to Rome by the direct route - not the one taken by the MM fleet - but to catch up with them for lunch in Arezzo.  It's (yet another) beautiful medieval town in Italy, this one beholden the (in?)famous Medicis.   Great welcome from all the towns folk and a buffet lunch under a grand marquee.