I sent out email yesterday to the rally organiser Roger's email list and got back several responses.
From Tor Allen, re his Peugeot 404.  He's going to send a piccie:
Update: here's the picture of the rebuild two years ago: 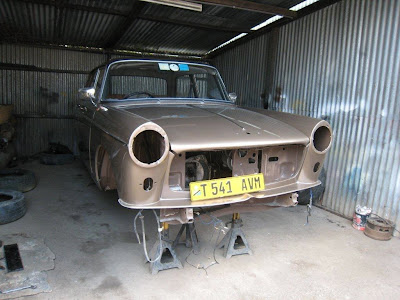 Very many thanks for you note below, …………I read with great interest your entry with  a Ford Mustang……I have always liked the look of the car and always remember when I first saw one in the USA many years ago,… it had such a long bonnet and also had the unmistakable three parallel rear lights on each side……

Just thought I might pass on to you a bit of  interesting history about my Peugeot 404 Fuel Injection that I will entering in to this crazy race to the Pyramids…you might want to add it to the blog ….I say this because I am most probably the slowest driver in  town and enjoy the scenery and the people along the roads in Africa. So some of the distances we are covering will be a bit long for me but will enjoy it all the same,  I have by the way  lived in East Africa all of my life…

The 404 is a 1966 model that I bought  from  a good friend of mine living  in London by the name of Guy Bromley in 2007 for about Sterling 4,000……. It had only done 27.000 miles and in fact, not much more even to this day, the spare wheel is the original one from the showroom, the paint work was also original … I have the original receipt that the Scottish owner paid for the car..it was purchased for Sterling 1,568,…on the 4 th August 1966.

By the way, Guy found the vehicle sitting on a Persian carpet inside a heated garage in a Scottish Castle where the original owner had kind of put it away I guess….. Anyway I had it sent by container to Dar Es Salaam here in Tanzania about  4 years ago and drove it to Arusha to where we live..about an 8 hour drive, and on the slopes of Mount Kilimanjaro, and then on to Nairobi in Kenya for a complete re-built to get rid of some rust and so on under the vehicle, it was there for almost a year till I bought it back here.

I took it back up to Kenya again last week to have things done to it ready for the Cape To Cairo with spares from Germany and all was fine till after the border when the car just stopped, luckily I found  the Contact Breaker  had broken, so with all my spares that I was carrying to Kenya in the back of the car I was back on the road again in an hour.

That’s it and will send you a picture later of the re-build,… I believe Roger has picture of the car  on the web.

Have fun and look forward to being together in September.

Best wishes to you.